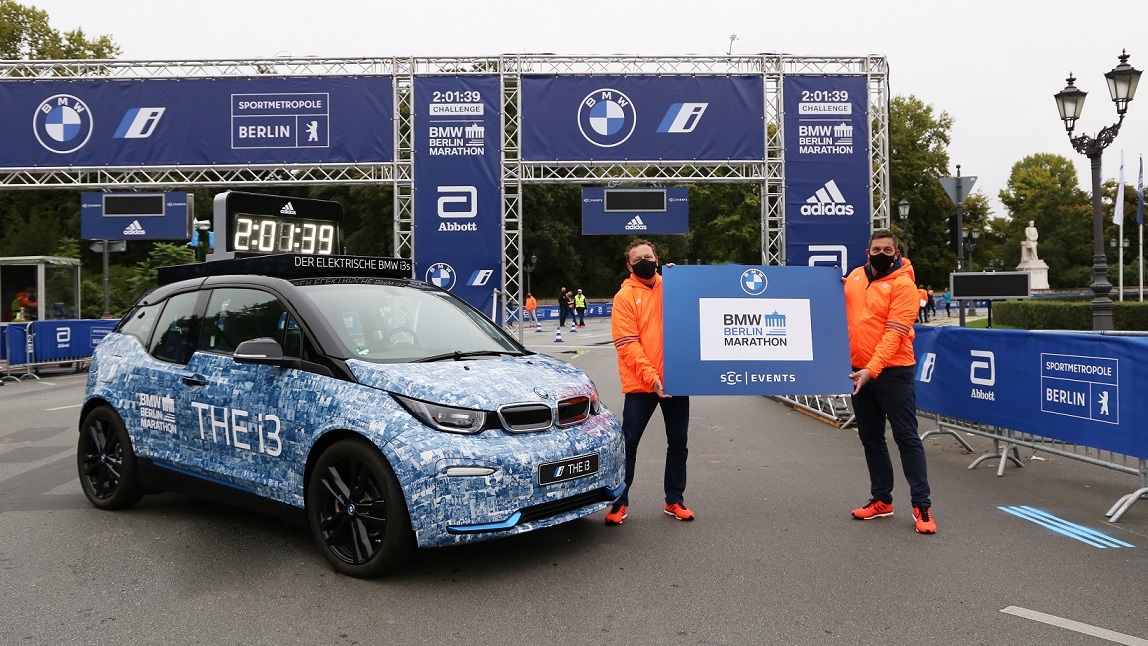 BMW and SCC EVENTS, organiser of the BMW BERLIN-MARATHON, have announced the extension of the title partnership, which has been in place since 2011, at Germany's largest marathon. Today, the 42 fastest kilometres on the international running calendar would have been started for the 47th time in total and for the tenth time with BMW as title partner. Despite the cancellation of this year's BMW BERLIN-MARATHON due to the Corona Pandemic, first-class sport will be presented in the capital today: A relay team will attack the marathon world record set by Eliud Kipchoge in the BMW BERLIN-MARATHON 2018 on a course around the Victory Column.

“We have a lot in common with this sporting event, which is one of a kind in Germany,” says Florian Baumeister, Head of Brand Experience BMW Germany. “You have the joy, the commitment and the absolute determination to push oneself to the limit, which is what drives all the runners – whether they are amateurs or among the best in the world. The BMW Group has placed sustainability and the conservation of resources at the centre of its focus. Extending the partnership with the BMW BERLIN-MARATHON is also an expression of this ambitious commitment, as running is arguably the most sustainable sport of all.”

Over the past years and decades, BMW has repeatedly set standards in terms of sustainability and has demonstrated this in the BMW BERLIN-MARATHON. Since the beginning of the partnership, all-electric lead vehicles have led the field: the BMW ActiveE (2011 - 2012), the BMW i3 (2013 - 2016) and the BMW i3s (2017 - 2020). These models are part of the strong foundation on which the BMW Group is building for the future. By 2030, the company has committed itself to specific targets that include 40 percent less CO2 emissions from more than seven million electrified vehicles, 80 percent reduction of CO2 emissions from production and sites per vehicle, and 20 percent reduction of supply chain emissions per vehicle.

"In order for our participants to continue to deliver top performances on the course of the BMW BERLIN-MARATHON, they are also dependent on cutting-edge technology and must use resources efficiently. In these areas, BMW as a premium automobile manufacturer also sets the standards", says Christian Jost, Managing Director of SCC EVENTS GmbH. "Furthermore, we are united with BMW by our passion for sports. We are pleased about the continuing title partnership with which BMW has been driving the BMW BERLIN-MARATHON since 2011, literally without emissions.

Starting at 00:01 MEST on Saturday, nearly 15,000 of endurance athletes from well over 120 countries have been on the road around the world to take part in the 2:01:39 Challenge. This makes the Challenge one of the largest virtual sporting events ever. The 2:01:39 Challenge is all about covering as many kilometers as possible in 2:01:39 hours, whether in running shoes, inline skates or by hand bike or wheelchair. 2:01:39 hours corresponds to the world record time set by Eliud Kipchoge in 2018 at the BMW BERLIN MARATHON. Participation is possible until 23:59 MEST today. In addition, top athletes are currently competing in women's, men's and skating relays to beat Eliud Kipchoge's marathon world record in a race around the Berlin Victory Column.

The BMW BERLIN-MARATHON 2022 is in the starting blocks